Ever since Satan deceived Eve in the Garden, he has been plotting to use mankind as he hopes to become as high as God. It’s a futile pursuit in the Grand Scheme of things as Satan is but a little newt compared to the Majesty that which is God the Father. But nonetheless, Satan’s control of the world took root once Adam ate of that fruit and sin and death entered God’s beautifully created, flat earth. 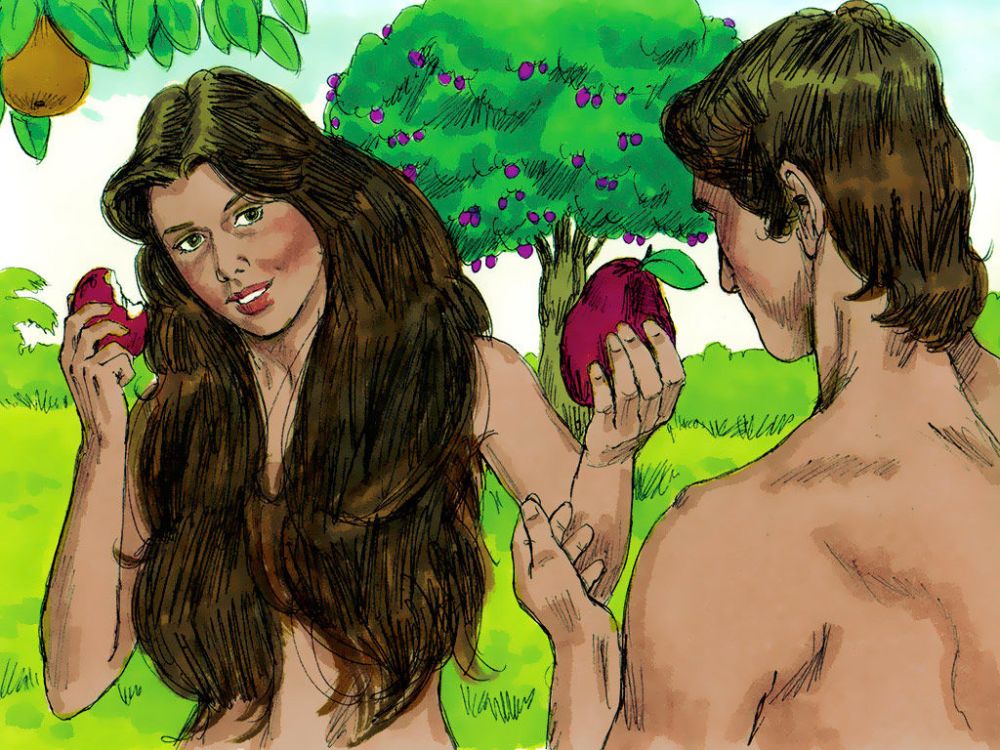 And since that fall of man, there has been a spiritual battle waging on Earth for man and woman. There is God’s righteous elect as seen with Abel, whereas Satan has his workers of iniquity as seen with Cain. Over the years these two different spiritual factions would continue, but those that knew God became fewer and fewer.

At the time just before Noah’s Flood, I guess you could say there was a One World Order established, call it Atlantis, or the Sumer Civilization that was full of iniquity.

Genesis 6: 1-8 “And the LORD said, My spirit shall not always strive with man, for that he also is flesh: yet his days shall be an hundred and twenty years. There were giants in the earth in those days; and also after that, when the sons of God came in unto the daughters of men, and they bare children to them, the same became mighty men which were of old, men of renown. And GOD saw that the wickedness of man was great in the earth, and that every imagination of the thoughts of his heart was only evil continually. And it came to pass, when men began to multiply on the face of the earth, and daughters were born unto them, And it repented the LORD that he had made man on the earth, and it grieved him at his heart. And the LORD said, I will destroy man whom I have created from the face of the earth; both man, and beast, and the creeping thing, and the fowls of the air; for it repenteth me that I have made them.”

As you can read from these verses, the world was full of evil, and a race of giants existed called the Nephilim, these nephilim I believe would be those individuals that got acknowledged as gods or demi-gods; Zeus, Hercules, Gilgamesh, etc.

The only righteous family found was Noah and his sons, and subsequently their wives whom God commanded Noah to build an ark so that mankind could continue on after God flooded the Earth to purge the iniquity. In the years following the flood, sin was still prevalent and mankind grew in numbers once again and new cities and civilizations sprouted up. Babylon and Egypt being the two big players. And special focus given to Babylon for the first major Anti-Christ figure, Nimrod.

Genesis 11: 1-9 “And the whole earth was of one language, and of one speech. And it came to pass, as they journeyed from the east, that they found a plain in the land of Shinar; and they dwelt there. And they said one to another, Go to, let us make brick, and burn them thoroughly. And they had brick for stone, and slime had they for morter. And they said, Go to, let us build us a city and a tower, whose top may reach unto heaven; and let us make us a name, lest we be scattered abroad upon the face of the whole earth. And the Lord came down to see the city and the tower, which the children of men builded. And the Lord said, Behold, the people is one, and they have all one language; and this they begin to do: and now nothing will be restrained from them, which they have imagined to do. Go to, let us go down, and there confound their language, that they may not understand one another’s speech. So the Lord scattered them abroad from thence upon the face of all the earth: and they left off to build the city. Therefore is the name of it called Babel; because the Lord did there confound the language of all the earth: and from thence did the Lord scatter them abroad upon the face of all the earth.”

Here we see another attempt at re-established the pre-flood world order. One language, one religion (very same religious order that persists today in secret societies), one world currency, and would also consist of the merging of the different races established by God after the flood. Satan knows that when mankind is fully united, sort of like a hive mind or a bee colony, and fully lose their ego that their binding together will overwhelm any connection to God, as they become deceived enough that they can work to overthrow God and become gods as themselves, just as the lie that Satan told Eve in the Garden, the very same belief spouted today with the New Age spirituality.

Genesis 3: 4-5 “And the serpent said unto the woman, Ye shall not surely die: For God doth know that in the day ye eat thereof, then your eyes shall be opened, and ye shall be as gods, knowing good and evil.”

In fact, the entire deception that Satan is ultimately painting on the world is the concept that he is the good guy and he is trying to enlighten mankind to their own powers and that God created us like slaves, and he plays sort of a Demiurge, or very controlling creative presence. Of course that is not true, God loves us and gave us the gift of life, but you can see this lie today. Look at how even Christians will look at the God of the Old Testament as being a “murderous psychopath” because they don’t fully comprehend the level of evil that existed at the time. It is symbolic all throughout Hollywood films and other works of fiction, look at the Lego Movie as a great example, at the end you can see the Will Ferrell character as being the controlling “Demiurge” representing what the satanists, new agers and pagans view as God, whereas the child represents Lucifer who is a free spirit, and freeing the characters in a sense.

These ancient civilizations were far more ADVANCED than our history books let on, I would argue they are more advanced in some ways than even our modern technology. It’s all knowledge given to these civilizations from the Fallen Angels. They had knowledge of ley lines, electricity, mathematics, calenders, astrology, etc.

From the two major civilizations I mentioned earlier, Babylon and Egypt, came two important religious priesthoods of sorts. From Egypt came the birth of Freemasonry and the hidden Occult knowledge. From Babylon was the Dagon Priests; As you can see from the picture below, these Dagon priests, whom worshiped Dagon, the “god of fertility” and was a “fish-god” after the flood, have a very similar looking hat, or mitre, to that of Roman Catholic bishops, of which the religious line would continue on as the various anti-Christ empires transitioned through the ages. Egypt => Babylon => Assyria => Persia => Greece => Rome => Roman Catholic Church (includes control of British and American Empires). 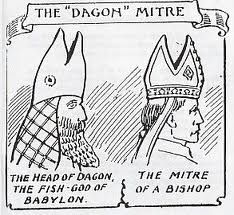 The knowledge of the people behind these civilizations spread through each subsequent empire and generation was passed through 13 different bloodlines where today nearly every President, Prime Minister or anyone in a life level of power such as the Royal Family are related to each other. And today, these people plan on finishing the work started by Nimrod in establishing their One World Order and attempt to fight and overthrow God.